Yong: It's time for action - NST

The government should not be distracted by the debate over whether it was better to have a royal commission or select committee to deal with the illegal immigrant issue. 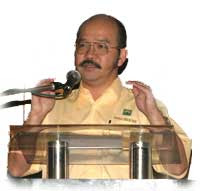 Sabah Progressive Party president Datuk Yong Teck Lee said action was needed urgently as ensuring the sovereignty of the country and security of the people was the government's duties.

"The government must not fail to defend the country's borders and protect citizens against huge numbers of illegals immigrants."

"Malaysia should use its leverage in international bodies like Asean and the OIC (Organisation of the Islamic Conference) to get the Philippines government to co-operate.

"Malaysia can also suspend the Zamboanga-Sandakan ferry, impose a bond on visitors, require ferry passengers to possess return tickets and step up enforcement at all levels."

Politicians have been debating over whether to have a parliamentary select committee or royal commission to deal with the illegal immigrant issue.

Yong is in favour of a royal commission.

He said a select committee was formed by the Sabah assembly in May 2001 with seven members, including himself, but after meeting twice in the same year and issuing an official document, there was no follow-up action.

"I doubt whether another select committee, even at parliamentary level, will make a difference.

"The formation of a royal commission, a favourite subject of the PBS before joining Barisan Nasional in 2003, is up to the federal cabinet, not Parliament. And as revealed by a PBS supreme council member, it was a PBS cabinet member who lobbied against the setting up of a royal commission.

"The only logical and remaining step is for ministers from Sabah to ask the cabinet to approve the formation of a royal commission similar to the commissions for the V.K. Lingam video clip, the police, the Anti-Corruption Agency and judicial appointments."

Parliament Deputy Speaker Ronald Kiandee had last week rejected a motion by DAP adviser Lim Kit Siang to amend the motion of thanks on the royal address to include a request for a royal commission to be set up to deal with the illegal immigrant problem.

Kimanis MP Datuk Anifah Aman backed the call and proposed a parliamentary select committee instead, citing that Sabah MPs would like to participate in the problem-solving process.
Posted by Billgates at 2:01 PM

All Sabahan MPs including SAPP should leave BN now and form alliance with Pakatan Rakyat for the sake of all Sabahans.

SAPP vote of no confidence towards PakLah

Composition of ADUNs and MPs of Sabah